After the great success of the project 'Informatik enlightened – deutschlandweit' (engl. Computer Science Enlightened throughout Germany) in 2014 it entered its second stage in 2015 with seven new cooperation partners.

Children and juveniles should have the opportunity to get an exciting and challenging trip into the world of computer science in the context of light – not only in Aachen's InfoSphere but throughout Germany. 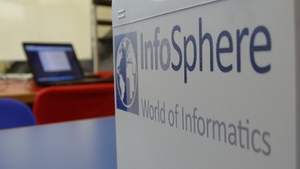 Thanks to our partner Federal Ministry of Education and Research (BMBF) we are able to transfer our newest model "Computer Science Enlightened - What Do Flowers, Cars and Solar Cells Have in Common" - which was created in 2013 in the context of a cooperation with the RWTH Aachen's FabLab and the BMBF - to seven locations throughout Germany since 2014. The five-hour workshop allows students from eighth grade on to explore the following projects using Arduino microcontrollers after completing the obligatory introductory project: 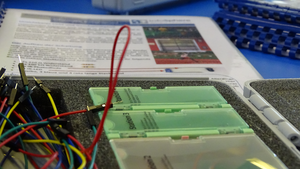 searching for enthusiastic cooperation partners who like to include this module into their program. Of course, we offer a one- or two-day transfer workshop at the new location.

Everything that is needed at the new transfer location are a few laptops or desktop computers (preferably 16), suitable premises, a day or two to get to know the workshop with our team (Day 1: Training the supervisors-to-be & Day 2: first conduction at the future premises) and, of course, having fun with getting to know a new approach into the world of computer science and light. Since several locations had problems with organizing the second day with students in 2014 we have started to offer one or two-day trainings (with or without students) at the transfer location.

All transfer locations (current and upcoming) are noted below , so interested Teachers can see where, in their region, the project is offered.Interested student laboratories, student data centers, museums or other non-school educational locations with focus on computer science and/or technology are welcome to use ourcontact form for future cooperation. 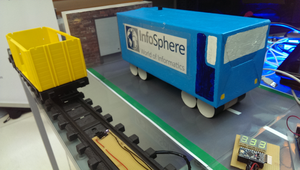 We look forward to not only make LEDs shine, but also the eyes of participants. All Materials are available for download here.

As we are always happy to receive feedback on our materials, we created a feedback page: http://informatik-enlightened.de.

From now on, our kits can be bought from the electrical retailer Watterott.

Multi-Day Advanced Training (incl. conduction with students on the second day) in 2014

Further One-Day Advanced Trainings for Teachers and Talks in 2014

Advanced Trainings for Teachers since 2014

The kits and our team are ready to go... Let's start!

On the seventh and eighth of May the first (of a total of seven) transfer workshops took place in Bremen. On the first day, 10 future tutors for our module "Computer Science Enlightened" participated in a teacher training. First, teachers and employees of dimeb - having varying amounts of foreknowledge - explored the different stations of our module on their own. 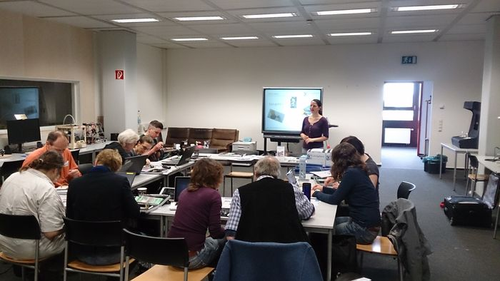 The next day, a workshop for pupils was held together with the newly minted tutors. This way the pupils could get first experiences in the world of Arduino programming and the tutors could use their newfound knowledge. Thanks to the BmBF it was possible to pass on a set of materials in full class strength, consisting of our Arduino sets and all working materials, to the local team, so now Computer Science Enlightened workshops can be held locally in the Bremen area.

Our journey will lead us next to Merzig in the Saarland on the 16th and 17th of June. We look forward to the next workshops and are eager to see what will sprout from our modules at the different locations.

Second Transfer Workshop, in the Saarland this time

This time (16th and 17th of June) the journey of "Computer Science Enlightened" lead into the Saarland, to InnoZ (SchülerZukunftsZentrum) in Merzig to be more specific. On the first day 17 teachers of surrounding schools got to know the module, before introducing the module the next day to 26 pupils of the Peter-Dewes-Gesamtschule Losheim.

We were happy to see the great interest of the teachers, as all sets were in use the first day. Thankfully we received a lot of comprehensive and constructive Feedback.

The pupils this time were beginners at programming, which did not keep them from curiously diving into the subject matter. The pupils’ amazing engagement led to wonderful results in the end. 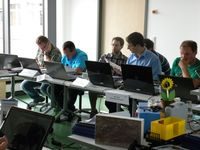 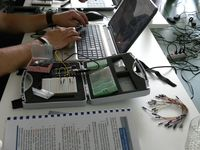 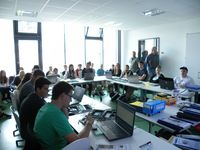 Transfer Workshop Number 3 in the Capital

From August 11th to 13th the InfoSphere project "Computer Science Enlightened throughout Germany" moved to the capital. 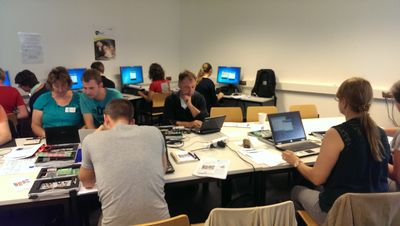 ein. On Monday, 18 teachers and employees of Berlin’s student labs the MI.Lab and the dEIn-Labor tried out our module for middle school and high school students. DDirectly after the training a two-day workshop with participants of the summer school at the FU Berlin took place. Although the participating pupils had varying foreknowledge, they created amazing results. The materials got a final workover and are finished thanks to the feedback from young and old participants. In addition, materials for teachers were added to the workshop.

Our journey lead us across Germany to the fourth transfer workshop for the project "Computer Science Enlightened throughout Germany". This time we transported our InfoSphere kits with all working materials to the Brandenburg technical college Cottbus-Senftenberg, to the project Science on Tour to be more exact. On the first day 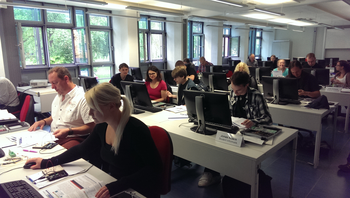 of our workshops, we met 18 highly motivated students of educational studies, teachers and professors. All of them were eager to get to know our project. It was exciting to watch how students and professors overcome the first hurdles of Arduino programming. Framed by an indulgence program of coffee, cake, and more, they plugged in, puzzled, programmed and beamed with joy, when the sunflower turned its head in the right direction.

On the second day, the journey continued a bit further - in the Science on Tour-Mobile -

to the Jahn-Gymnasium in Forst. Before the kits were used, they were ceremoniously presented to the b-TU Cottbus-Senftenberg. After the kits were opened, everything began, and the pupils felt the same as the adults a day before: it was plugged in, puzzled, programmed, revised and tested and finally marvelled. A joyous "Yaaay!" could be heard when the Arduino worked as supposed.

The InfoSphere project sparse no-one, either the TV. That's why the workshop in Senftenberg is documented here:

The full video is available under: https://www.youtube.com/watch?v=IAsuhBhGUWc

On November 6th and 7th the InfoSphere or rather the Computer Science Enlightened Workshop’s journey continued. The destination was Wiesloch near Heidelberg.

On the first day, teachers of different schools from around Wiesloch were able to test out the Arduinos themselves and gather their own experiences with the materials. During this, our slightly damaged polar bear Lars was revived, thanks for that. Of special interest was the potential application of Arduino programming in the subject NwT (Naturwissenschaften & Technik [Science and Tech]) in middle schools.

On the second day, pupils of the Ottheinrich-Gymnasium Wiesloch were the center of attention. Supported by the new lecturers (although their help was hardly ever needed), the pupils discovered the world of microcontroller programming by means of our various stations. One team worked so fast that they started to combine different stations, i.e. the RGB-LEDs were integrated into the parking aid as an optical warning signal (for example for hearing-impaired).